Executive Director Jennifer Henry gives us a dip in Bathurst

The top African travel market from Gander is Ghana. 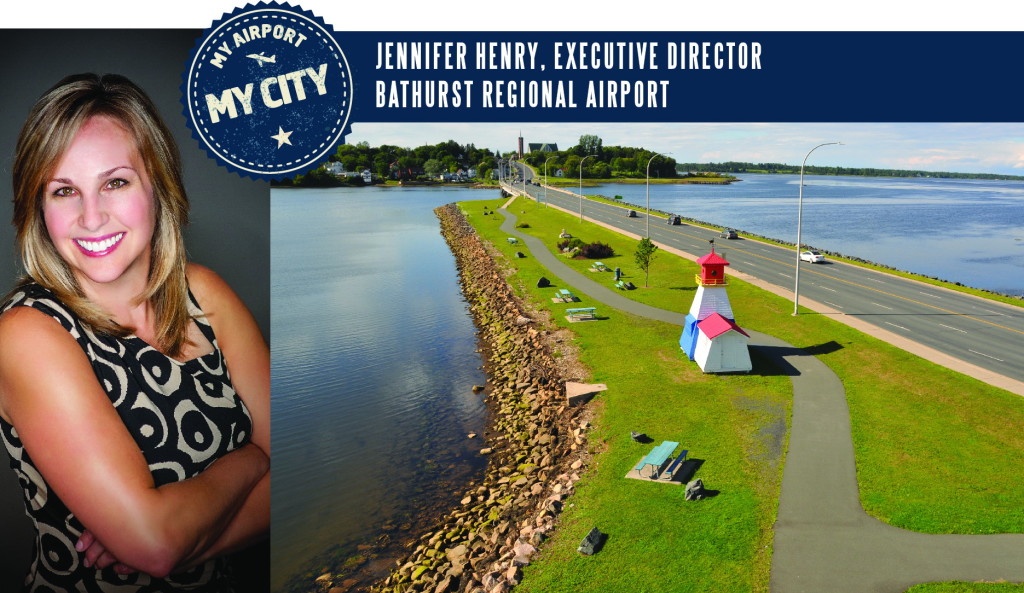 The best thing about my airport is you are most likely to know at least one person who is taking the same flight as you.

The vibe in my city is friendly, laid-back and very bilingual; it’s not unusual for someone to switch from English to French or vice-versa in mid-sentence.

My city is better known as the home to the international Xtreme Race CCNB, a downhill skating challenge that is now part of the Riders Cup circuit, a qualifier for the Red Bull Crashed Ice events.

Local delicacy Our famous Danny Burger. It’s a cheeseburger covered in “Danny” sauce; a sweet, savory, messy concoction. There’s no way you’re eating this burger with your hands! And the best place to have this burger is at the BIG-D Drive In.

Where to wet your whistle Fils du Roy has a distillery in Petit-Paquetville that produces one of the best gins I’ve ever tasted, Gin Thuya. It recently won Gold Medal at San Francisco’s World Spirits.

Best day trip from my city there are so many! The Acadian Peninsula brings you to the heart of Acadian culture; Mount Carleton has the highest peak in the Maritimes (820m); and there are so many kilometers of trails and beaches to explore just within the city limits.

My city’s famous daughter is Janick Arseneau, who placed 4th on Season 3 of So You Think You Can Dance Canada. She is now dancing in Las Vegas in Jennifer Lopez’s show All I Have.

My favorite restaurant is Joey’s Pub and Eatery. It has a laid-back feel and the food is always great.

Best place for a stroll Daley Point Reserve is a 100 acre naturalist’s dream located right in the city. It boasts pristine salt marshes, forest, trails and an abundance of wildlife.

One peculiar thing about my region is the Phantom Ship. Legend has it that at the beginning of the last century, a ship’s captain kidnapped two indigenous girls and hid them under pelts. The local pilot heard their cries and saved them. The girls warned him against going back on the ship but alas he did not heed their words. The ship was hit by a huge backwash and the entire crew drowned. Only the pilot made it back to shore. That very same night, a giant red light appeared over the water that took the shape of the ship. People still claim to see the Phantom Ship burning on the Bay during stormy weather to this very day.

If you come, don’t miss a chance to go mackerel fishing on the beautiful Bay of Chaleur in August. It’s quite a thrill! And to add to the experience, the Bay of Chaleur was inducted into the prestigious Most Beautiful Bays in the world in 2004, so enjoy the view.

My one general travel tip Travel light. Do you really need 4 pairs of shoes?

The biggest misconception about running an airport is that people think I can get discounts for them on flights. I really can’t. If I could, I’d be travelling a whole lot more, trust me!