On average, 2.1 greeters/well wishers are on hand to welcome passengers arriving to the airport. 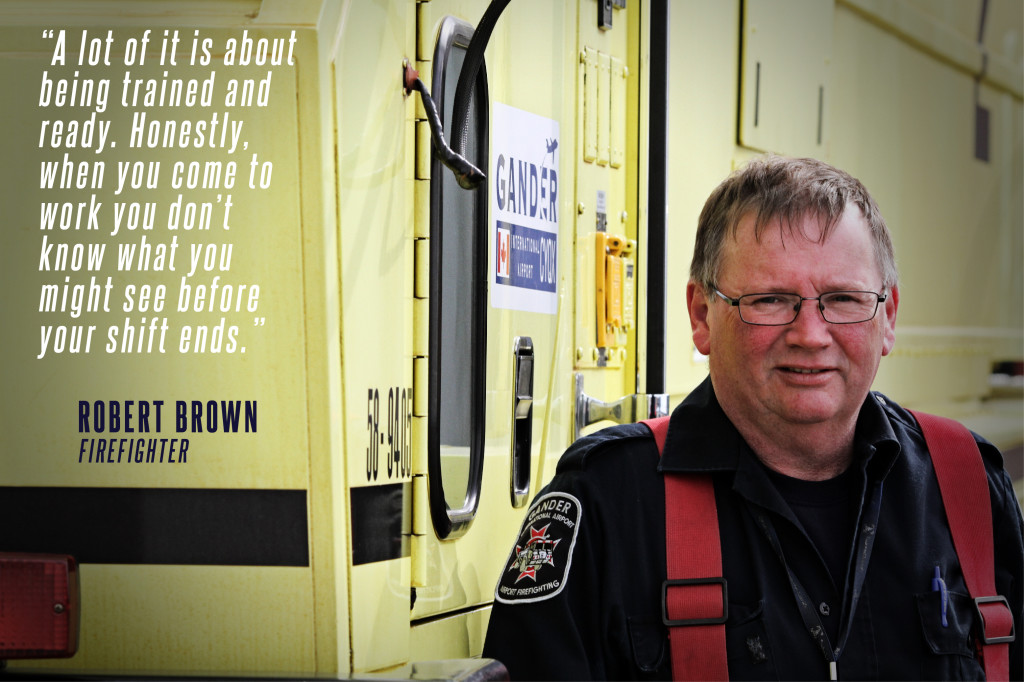 Like many Newfoundlanders, Robert spent four years working on the Mainland.

“I had enough of it, so I came on home in 1992. A good friend of mine worked at the airport. He said they were looking for people and it was a good place to work, so I applied.”

Robert worked seasonally for a couple years and then became a full-time employee in multiple roles, from a Heavy Equipment Operator to Field Foreman. In late 2015, he became a full time dedicated Firefighter.

Robert was born and lives in Glenwood with his partner Cathy. His 15-year-old son Tyler is deeply involved in hockey as a goaltender – every cost-conscious hockey parent’s nightmare.

When he’s not working shift, you can find Robert everywhere but on the couch or in a lawn chair. Robert admits he needs to be constantly moving and doing something, but we forced him to sit down and talk to us.

Q. So what does a typical day at work involve for you?

The fire hall is really about the routine. When I come in, I put my coat and hat in the truck, and the bunker pants and the boots outside. So if you hear the alarm, you can just throw it on and go. Then you do the daily inspection of the three trucks. After that, you check to see what traffic is coming and you plan accordingly. The job changes with the traffic – sometimes the phone doesn’t stop, and then there are days it doesn’t ring. The other important part of emergency response at an airport is ongoing training. It operates in 18 month training cycles and then you start over again. The reason you do that training, besides the regulatory requirement, is so you are fully prepared to address diversions and emergencies.

Emergency response at an airport often isn’t well understood. What does it involve?

It could be a mechanical diversion, an aircraft coming in with an engine out, then all the trucks have to take up standby positions on the runway. Usually with mechanical diversions, you have an aircraft coming over and she could be just leaving New York and is full of fuel. The aircraft could be heavy and when she lands the brakes heat up and you have to deal with that. Other times, you deal with medical emergencies. First thing you do in this situation is to call the hospital, RCMP and then customs and the ground handler. If the ambulance isn’t here when the plane gets on the ground it could be hectic. In the case of emergency, you have to be out in the truck and out the door in 30 seconds. A lot of it is about being trained and ready. Honestly, when you come to work you don’t know what you might see before your shift ends.

How does an emergency response truck handle versus a normal car?

Of course there’s a difference in size, plus a car has a low center of gravity. The fire truck is very high, so when you go out on the taxiway at high speeds you threaten that she will tip over. You have to be very careful and you have to know what you are doing. That comes through training and experience.

What’s your favorite part of the job?

The best part of it is finishing a shift where nothing drastic happens. Emergency response at an airport is one of those jobs where you hope that you don’t have to do what you’re trained to do. The best part is when you go home at the end of the day after twelve hours and all the aircraft have landed safely.

What do you do in your spare time?

I am not a person for lying around the house. Never was. I built two houses for myself. Before, I used to work for a guy in Appleton with heavy equipment and I used to be at that on my days off. There’s always something to do. I have a house and two cabins. The new one I just finished, as a matter of fact. I love snowmobiling and being outdoors.

Do you have any hidden talents?

If you could have any superpower, what would it be?

I would like to be able to read people’s minds. That would be very helpful.

The world is ending tomorrow morning. What are you having for supper this evening?

What destination is on your bucket list as the place you must visit?

What thing cant you do without when you’re traveling?

A cellphone, really. My parents are in their 80s. If I am going somewhere, my son lives in Gander and I live in Glenwood so a cellphone is needed in terms of communication.

What is your most cherished possession?

I collect old license plates and old soda bottles. So collectibles and stuff like that.

The best advice that I have ever received was from my parents. They told me that if you want anything extra in life, you have to do the extra work to get it.